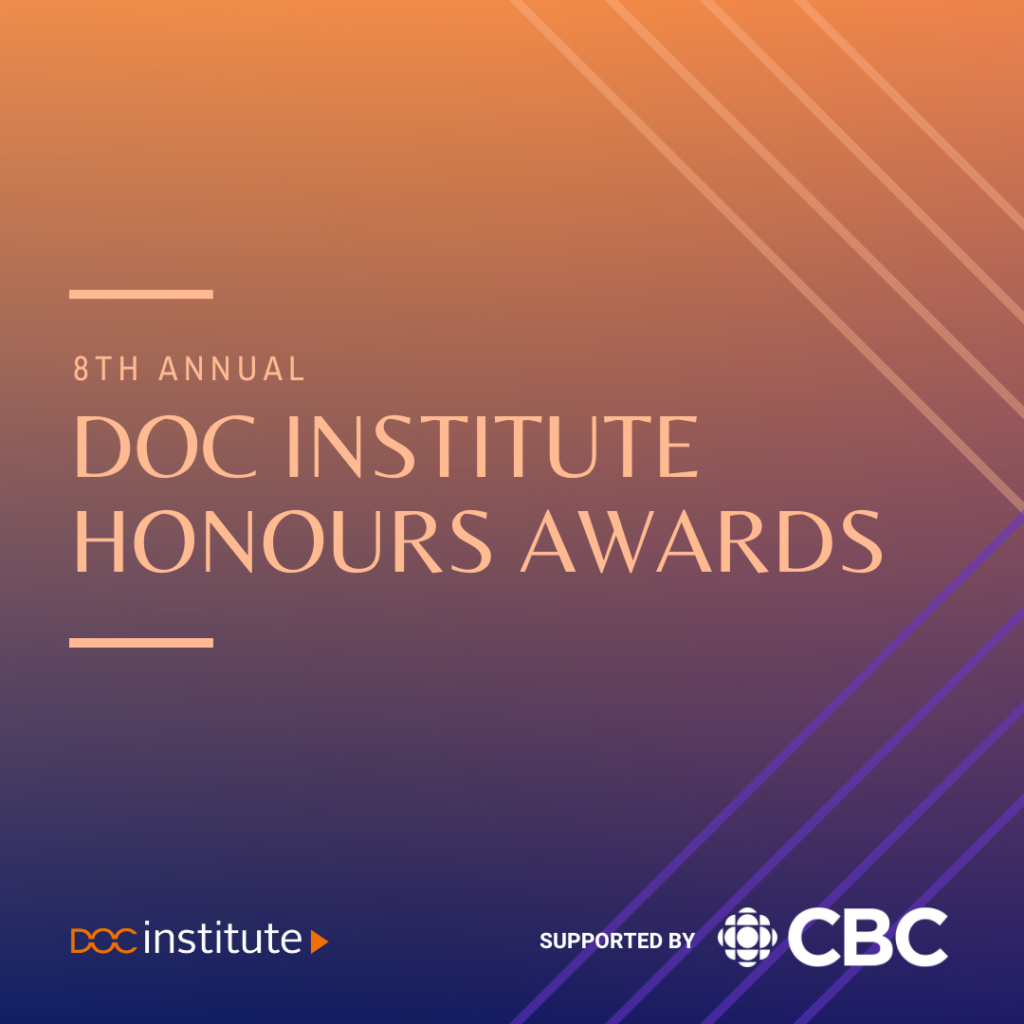 DOC Institute is happy to announce the 8th annual DOC Institute Honours Award winners. While the Honours Celebration has been postponed to early 2022, we hope you will join us in congratulating the recipients of the 2021 DOC Vanguard and Luminary Awards.

Tamara Mariam Dawit is the recipient of the DOC Vanguard Award. The Vanguard Award is reserved for mid-career creatives who demonstrate a keen artistic sensibility and forward-thinking approach to the craft and show the potential to lead the next generation of doc-makers.

Tamara Mariam Dawit is an Ethiopian-Canadian filmmaker and policy advisor in the creative sector. She works as a consultant in the screen sector on strategies to address access, export, stability and sector development in both Africa and in North America for equity-seeking communities. In Canada, she is a founding board member of the Racial Equity Media Collective and in Africa of Ethiopia Creates and the East Africa Screen Collective.  Her most recent film is the award-winning documentary Finding Sally which premiered in 2020 at Hot Docs. Along with the Vanguard Award, Tamara will be receiving $10,000 of film equipment from Canadian production supplier SIM-International.

Watch Dawit’s acceptance speech by clicking the video to the right (or below on mobile)!

Sylvia D. Hamilton is the recipient of the DOC Luminary Award. The Luminary Award is given to an individual who embodies the creative spirit of the Canadian documentary tradition and displays generosity by supporting the next generation of doc-makers through mentorship, working behind the scenes to ensure that the genre remains strong for generations to come.

Sylvia D. Hamilton is an independent filmmaker, professor emeritus at the University of King’s College’s School of Journalism in Halifax, and a founding member of the DOC Atlantic Chapter, Hamilton has had a lasting influence on the documentary genre in Canada.  She has presented her films and lectured widely internationally and has received numerous awards including the CBC Television Pioneer Award and the 2019 Governor General’s History for Popular Media. In 2021, the Film Studies Association of Canada named a speaker’s panel, the Sylvia D. Hamilton Dialogues, in recognition of her lifetime of leadership, support, and mentorship of emerging scholars.

Watch Hamilton’s acceptance speech by clicking the video to the left (or above on mobile)! 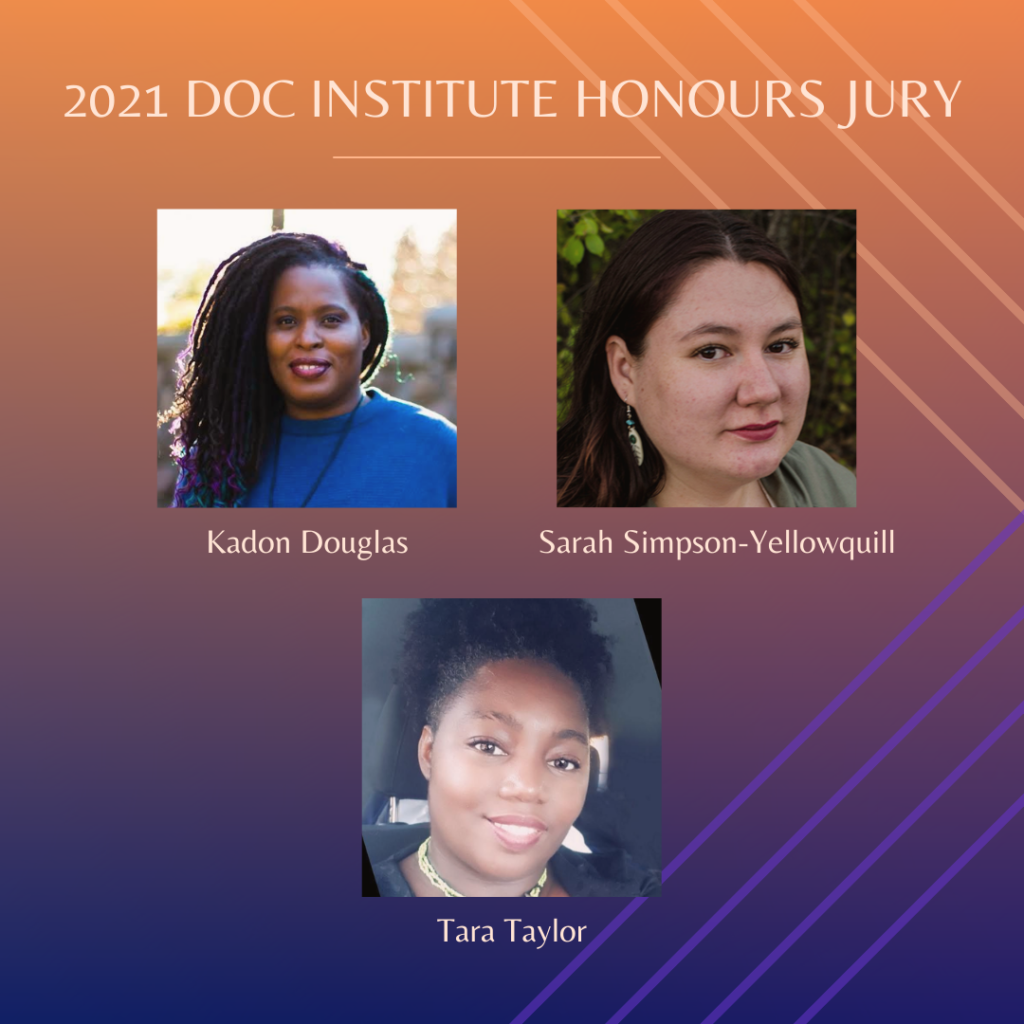 The DOC Institute Honours Awards winners were selected by a jury that includes Kadon Douglas, Sarah Simpson-Yellowquill, and Tara Taylor.  Click the name belows to see each juror’s bio.

A storyteller and community connector at heart, Kadon Douglas is the inaugural executive director at BIPOC TV & Film. Kadon is an experienced not-for-profit professional specializing in community engagement, marketing, and communications. Previously, she led communications and membership engagement strategies and advocated for gender equity in screen-based media at Women in Film & Television-Toronto (WIFT-T).

Kadon also worked for several years in the documentary production field as a production coordinator, researcher, and digital marketing/audience engagement specialist. She is a two-time fellow of the Hot Docs Film Festival: Doc Accelerator (2013) and Shaw Media Diverse Voices (2015); and is a 2019 Ontario Nonprofit Network RBC Leading the Future fellow. Kadon is also an active member of the screen-based media community, volunteering her time on various committees and juries, and is the former chair of the Reelworld Film Festival.

Sarah is a multi-talented Indigenous woman, born and raised on Treaty 1 Territory, (Winnipeg, Manitoba). She is a filmmaker with extensive experience who is dedicated to her craft and has made multiple short films that have screened at North American festivals. She strives to create stories and to help others share their stories through the medium of filmmaking.

Sarah went from thinking filmmaking could only be a hobby to making it a full-time career for herself: as a production manager for various productions and working at the National Screen Institute.

She is also co-chair of the board of directors for WNDX Festival of Moving Images and Chair of the Winnipeg Film Group.