DOC Institute is pleased to announce that TIFF Chief Programming Officer Anita Lee and acclaimed filmmaker Nisha Pahuja have been recognized with the top documentary achievement awards at the 9th Annual DOC Institute’s Honours Awards, presented December 8 at the Hotel Ocho in Toronto.

Anita Lee, this year’s winner of the Rogers-DOC Luminary Award, epitomizes all the qualities of a Luminary Award winner. A media executive for over 25 years in the industry, she has been an innovative industry leader at every stage of her impressive career, repeatedly recognized for her programmatic and strategic vision. Lee has been lauded for her producing achievements, including one of Canada’s most critically acclaimed films, Sarah Polley’s Stories We Tell. Named Chief Programming Officer at the Toronto International Film Festival (TIFF) earlier this year, Lee was previously the Executive Producer and Studio Head of the National Film Board in Ontario, where she was a pioneer in groundbreaking digital media, established NFB Ontario’s equity strategy to centre racially diverse talent, and transformed that body into an international leader in documentary film and creative technology. Lee also founded the Reel Asian Film Festival. She has spearheaded strategic national and international partnerships in production, exhibition and in new distribution models. Accolades and awards have followed her along every step of her career. 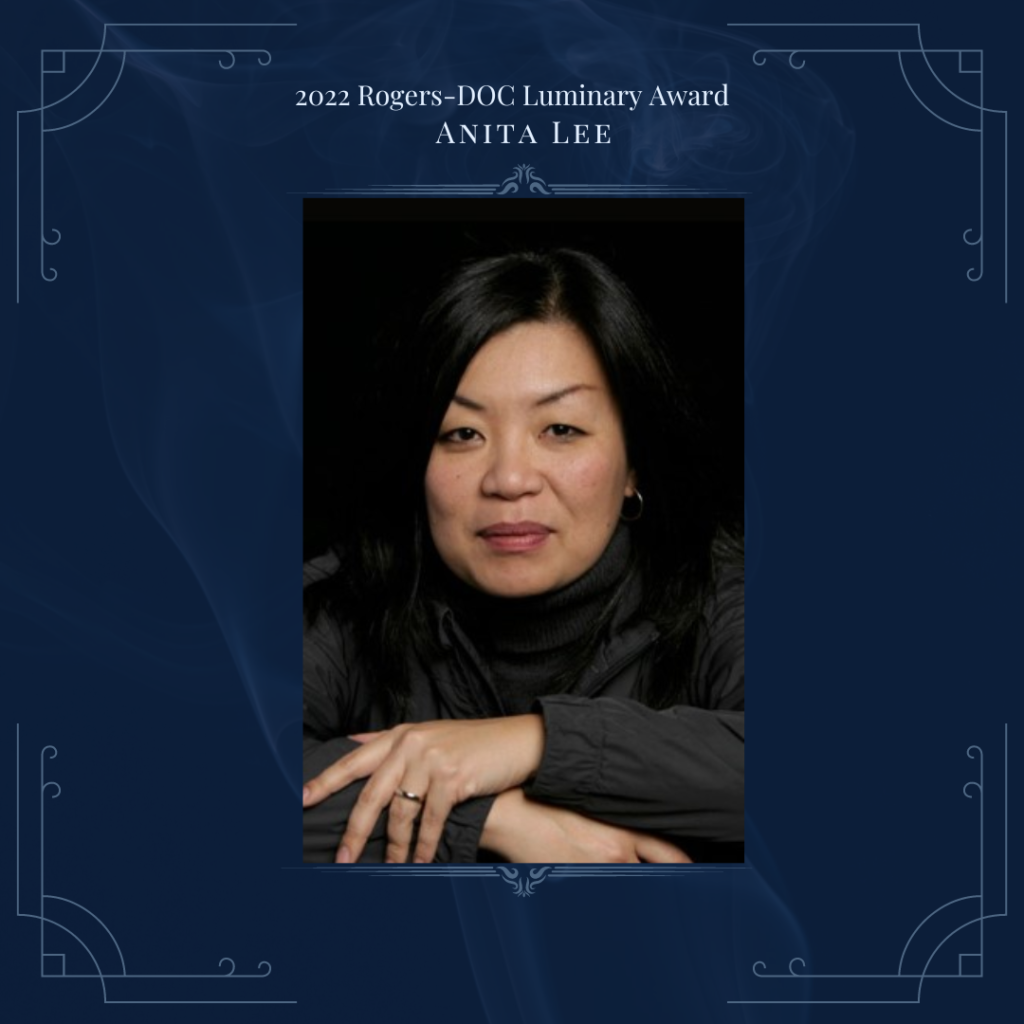 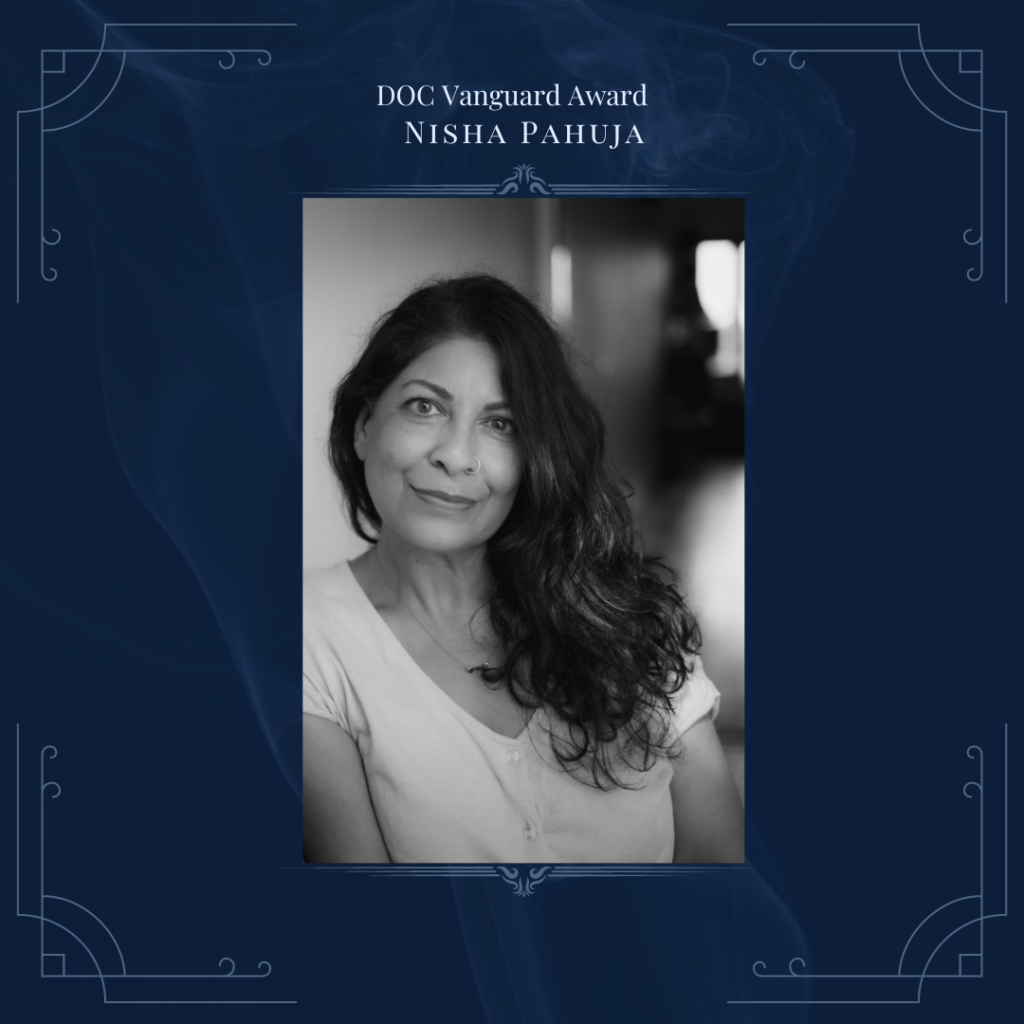 Nisha Pahuja, this year’s winner of the DOC Vanguard Award, becomes, with each new film, more and more of a force in Canadian documentary filmmaking. Her films have consistently tackled challenging subjects and been honoured at film festivals in Canada and internationally. Her credits include the series Diamond Road (2008 Gemini Award for Best Documentary Series), Bollywood Bound (2002 Gemini Award nominee) and the multi-award-winning The World Before Her (2012), which was nominated for an Emmy Award and won awards at the Tribeca Film Festival, Hot Docs, TIFF, the Canadian Screen Awards, The Vancouver Film Critics Association, and Sundance Film Forward Program. Her short film about the Delhi gang rape, made for Global News’ 16×9, was the recipient of an Amnesty International media award for Canadian journalism in 2015.

Nisha was invited to be a Resident Fellow at the Rockefeller Foundation Bellagio Center in 2014 and was on their arts selection panel from 2016 to 2020. Her latest film, To Kill a Tiger, premiered at TIFF, 2022 where it won the Amplify Voices Award for Best Canadian Feature Film and, soon after, the Inspiring Voices and Perspectives Award at the Sudbury International Film Festival. It was recently selected as one of TIFF Canada’s Top Ten, 2022

I feel very honoured to receive the DOC Institute's Vanguard Award this year. To be recognized in this way by colleagues and peers is definitely a moment of great pride for me, especially as it follows the completion of To Kill a Tiger — which had me wondering at times if I should just raise chickens...! All of us who make documentaries know what it takes to keep going. I'm proud to belong to this community and I'm so grateful to DOC and the jury for their vote of confidence. 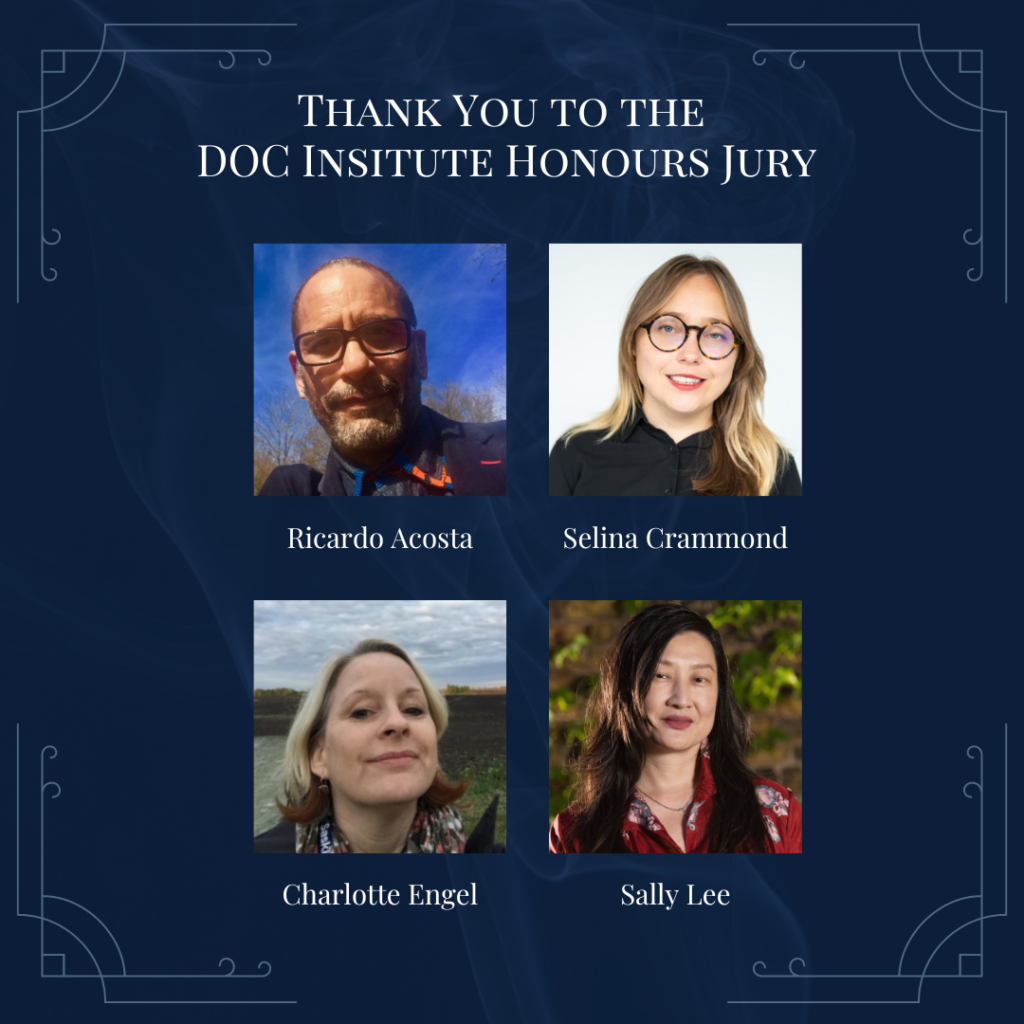 Special thanks to the 2022 DOC Institute Honours Jury. Learn more about each jury member below.

RICARDO ACOSTA is a film editor, script consultant and member of the Academy of Motion Picture Arts and Sciences and the Canadian Cinema Editors. Acosta moved to Canada from his native Cuba where he studied and worked at the world-renowned Cuban Film Institute (ICAIC). He has been an Alumni and Adviser of the Sundance Institute’s Documentary Editing Lab, and the Music Composition and Sound Design Lab. A few of his editing and story consulting credits include: Once Upon a Time in Venezuela (2020), The letter (2019), The Silence of Others(2018), winner of GOYA, ALMA, and the Berlinale Panorama Documentary Audience Award, Sembene! (2015), and Marmato (2014). His films have premiered at Sundance, Cannes, and IDFA, among other world film festivals. He is an Emmy winner and nominee for the Canadian Industry Genie and Gemini Awards, Canadian Film Editors Association Awards and Canadian Screen Awards.

Selina Star Crammond is a film programmer and cultural worker based in Vancouver B.C. on the unceded xwməθkwəy̓ əm (Musqueam), Skwxwú7mesh (Squamish) and Selílwitulh (Tsleil-Waututh) territories. She has been involved with the B.C. documentary film community for over 10 years, most notably through her role as Director of Programming at DOXA Documentary Film Festival where she provided strategic and artistic leadership for the organization. Currently, Selina works as a Program Analyst at Creative BC, where she manages funding programs that support scripted and non-scripted film and television projects. She is also a programming consultant for DOXA Documentary Film Festival and an International Programmer at Hot Docs Canadian International Film Festival. When not watching a thousand documentaries, Selina is pursuing a graduate degree in Liberal Studies at Simon Fraser University with a focus on political theory and eco-cinema.

Charlotte Engel is a producer and a former broadcaster with over 30 years of experience in film and television. While at CBC, she oversaw CBC’s cutting edge documentary strands Firsthand and CBC Docs POV. She specialized in bringing unique voices and unforgettable stories to CBC. Many of these documentaries won multiple awards ( “Indictment: The Crimes of Shelley Chartier”, “Nipawistamasowin: We Will Stand Up” and “The Skin We’re In”). As a producer of documentaries for Rock Yenta Productions, she brought docs to CBC, TVO and the Documentary Channel. She won a CSA for “My Millennial Life” and a Golden Sheaf award for “Mugshot”. Engel has sat on the boards of Hot Docs, DOC Ontario and imagineNATIVE.

In addition to serving as Executive Director of the Canadian Independent Screen Fund for BPOC creators, Sally is on the boards of the CONTACT Photography Festival and Wavelength Music. She is a member of the Advisory at Reel Asian, where she served as ED for three festivals. She also led artists rights group CARFAC Ontario as ED and has variously held leadership, staff, board, and advisory positions at TIFF, Soulpepper Theatre, Liaison of Independent Filmmakers of Toronto, Canadian Filmmakers Distribution Centre, Images Festival, Coalition of Canadian Independent Media Arts Distributors (VUCAVU.com), Workman Arts (RWM Festival), Toronto Arts Council Visual and Media Arts Committee, and Access Copyright.